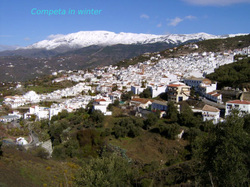 At 10 kilometers away from the villa lies Cómpeta. The quiet, white village has 3,500 inhabitants and is 650 meters. It is a nostalgic village with narrow, steep streets full of geraniums. There is wine and honey made ​​and there is a wine museum. On August 15 each year the celebrated Noche del Vino, a wine festival. Around the village there are beautiful nature, really a must for nature lovers. There are several rivers and waterfalls, where walks are. Use this link to view a video of Competa 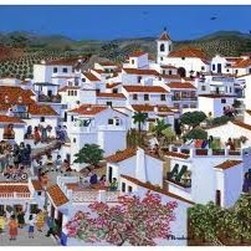 Sayalonga is a village located in the Axarquia region with a lot of history from the time when the Moors conquered Andalusia. There are many monuments and also there is a Moorish Museum. Sayalonga in this region is also known for its "Nisperos", or the fruit of the medlar tree. In May, the harvest of this fruit is brought in and a big feast, where 7000 visitors each year to come. Sayalonga also has the only round cemetery of Spain. 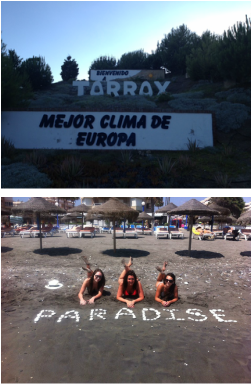 Torrox is located east of Malaga and prides itself with the slogan "the best climate in Europe." Torrox probably has its origins in Roman times, there are remains of a factory / city found. The Romans developed here the preservation of fish, the garum that Rome would be very popular.
During the Moorish domination was the manufacture of silk, the main source of income. For the caterpillar cultivation were therefore everywhere in the area planted mulberry trees.
After the reconquest by the Catholic Kings Torrox was largely depopulated, because most of the residents were Moors.
In 1884/1885 Torrox was hit by two earthquakes with many properties were destroyed.
Torrox Costa has become a popular holiday resort with a wide promenade on the beach. The upper village Torrox has still preserved its ancient atmosphere.

Nerja is a pleasant, but versatile town on the Mediterranean Sea in the state of Spanish Andalusia. This easternmost town of the Costa del Sol is a really nice, attractive destination for young and old. You can perfectly enjoy the wonderful beaches, many  restaurants , entertainment , local attractions, nature and recreation, cultural  festivals and holidays .
Nerja's charm lies inter alia in the beautiful  location  on a plateau above the sea causing a large number of  beaches  are formed, each with its own character. This combined with the magnificent viewpoint  Balcon de Europa  and the typical Spanish narrow streets in the  historic  center make Nerja really picturesque. Because the town is mature later than the coast west of Malaga, there are relatively few high-rise buildings. On the one hand, Nerja is surrounded by farmland and on the other by a mountainous  natural area (towards Cerro Gordo) with magnificent views and beaches. The coastline is 16 km of which 13 km beach.  Nerja is famous for its caves, the